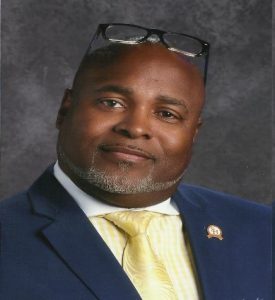 Hon. Cedric Davis Sr. is a Christian father of five with three beautiful grandchildren. Cedric enjoys sports, great food, intellectual conversations, and leading community and political activities. He has served in a public servant role for more than three decades. He is a Desert Storm Veteran, Police Chief (Ret.), and former public educator who proudly assisted fifty-two students with getting into institutions of higher learning. Davis background is in Public Policy and Administration, Criminal Justice and Law Enforcement Management, Business Administration, and Public Education. He served seven years as the CEO of FSAP, LLC of Texas and Louisiana. Historically, Cedric served as the First African-American Mayor of Balch Springs, Texas. In 2018, he again made Texas history by becoming the First African-American candidate of a major political party to finish within the top three primary finishers in a Texas Governor’s race. Davis was significant in turning the City of Balch Springs from being a very quiet and sleepy-town into a vibrant and booming-town with lots of economic development and amenities for its citizens and visitors. When he was the mayor of Balch Springs, Davis initiated community partnerships like the Annual U.S. Congresswoman Eddie B. Johnson Small-Towns Economic Development Summit, other annual community programs such as the Annual Mayor’s Back to School Bash, Dr. MLK Jr. and Cinco De Mayo Celebrations. As police chief of WHISD PD, Davis implemented tutoring and mentoring programs such as “I am my brother’s keeper a real talk with cops” a designed program for at risk students. He values intelligence, hard work, and uniting people together for the common good. “I am graciously proud to serve the citizens of Marlin, Texas.”

It is the City Manager’s job to make sure the policy decisions made by the City Council are carried out and that public services are delivered efficiently and effectively within approved framework.

Attending city council and other public or conference meetings as necessary. Making public policy recommendations to the Council, which the Council may accept, reject, or modify. Implementing any action taken by the Council. Assist the city finance director with preparing the annual city budget. Make budget recommendations to the City Council. Oversight of 10 departments managers who supervise approximately 60 employees, and any open city projects. Seek out viable economic development and tourism opportunities that benefits the growth of the city. Recruit a talented city work force.